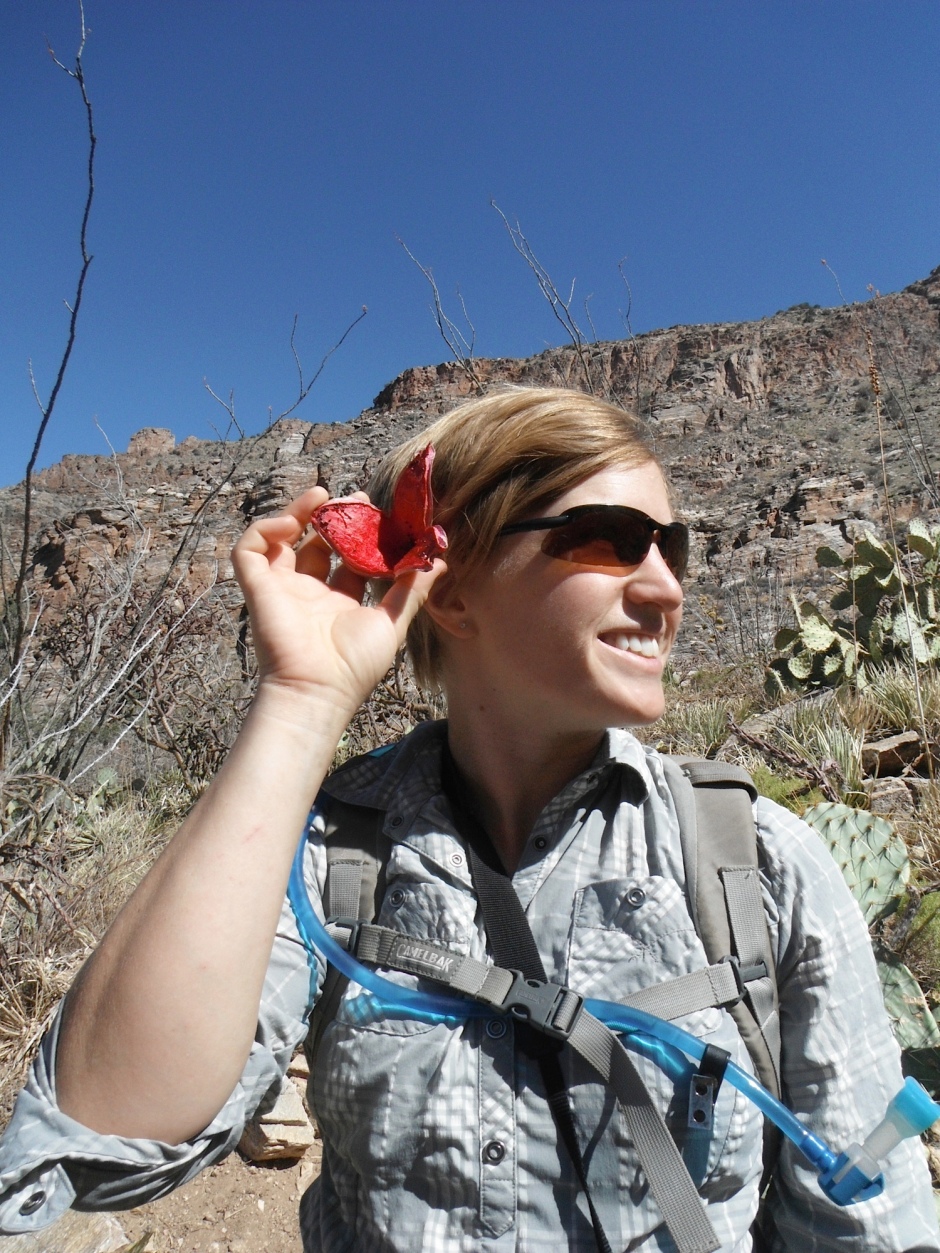 The news (and some photos on Facebook) would have me believe the summer is all about sitting on the beach, enjoying a fast paced book. But my last three summers in the Sonoran Desert have been a race against time to census seedlings as they pop up and quickly die following the patchy monsoon thunderstorms. The seasons have been full of long days in the hundred degree plus heat, and dreaming of seedlings again in my sleep.

Actually, the monsoons that just began may have brought a silent sigh of relief from many dry and browning plants in the region. The long, arid early summer was finally over. June can be a miserable time of year, made bearable by the fact that candy falls out of the sky. Saguaro fruits (Carnegiea gigantea) ripen and split open during June, revealing the sugary flesh surrounding thousands of seeds the size of poppy seeds. Those the white winged doves fail to eat off the cactus fall to the ground, where, if we are lucky, we find them before the coyotes, javelinas, or ants. As they dry in the sun, they reach a sticky, chewy, very sweet consistency, broken by the bitter crunch of the seeds. A little like a date or a fig, maybe. Mostly it tastes like a saguaro.

A few species seemed to jump the gun on the monsoons. During a season when most stems are brown and the only leaves that dare show themselves whither reticently, the limberbush (Jatropha cardiophylla) in the Santa Catalinas started to put out small leaves and even to bloom, a full two weeks before the monsoon rains arrived! I observed them myself on a hike up the Finger Rock Trail with naturalist David Bertelsen and environmental science teacher Elena Martin on June 27. In this unpredictable region, with its patchy storms and fickle promise of rain, why spend the energy and the water to make flowers prior to the storms hitting? Where had the plant held on to this reserve of moisture? Was it to get the jump on all the other plants when the rain finally hit? Do limberbush in other canyons, and other mountain ranges have this same phenology? Do they always in the Catalinas?

Dave is one of the few people who could may actually be able to answer that final question, by checking his notes. Nearly 30 years ago, he set out to hike the Finger Rock Trail weekly for 20 years, all the way from Tucson to the top of Mount Kimball, and record all flowering species and which section of the trail they appeared in. The result is a rich data set of phenology (the seasonal timing of events) of the flowering plants along that trail, which climbs thousands of feet in elevation. He has published several papers on this data, along with Theresa Crimmins and Mike Crimmins. I was astounded that he had a vision right from the start of the degree of dedication and the amount of time he planned to continue. It was a bold vision, especially for someone who was working a full time job – and not a research job.

Speaking of working full time at a job outside of academia and even scientific research, we had a conversation along the way about the term “citizen scientist.” To me, that term evokes the National Guard’s advertising campaigns for “citizen soldiers,” individuals who have a high degree of training and professionalism in their military duties, even while not being full time employed as such. But Dave hears it differently: he wonders why the “citizen” need be there at all. It implies that scientists are a class apart, excluding the general public, instead of being accessible to anyone pursuing answers through rigorous use of the scientific method. Charles Darwin, for example, was not a professional scientist, but made great contributions to scientific fields. Albert Einstein was employed full time at a patent office while he developed much of the early theory of relativity. Dave suggested the term “naturalist” has a less diminutive connotation for people studying nature without an official posting to do so.

After our hike, I was reading through the final entries in the field journals kept by students on the field course I recently helped teach. One of the final questions posed by the main instructor was, “What research project would you want to go spend an additional three weeks studying?”