What’s the SNOW like? Is it dry? Are the layers well bonded?   – Marielle

The short answer is that I haven’t seen much snow (until now!).

Most of the side of the island McMurdo Station is on was pretty snow-free by the time I arrived, whether from wind or sublimation or both, I don’t know. (Definitely in town there was some evidence of plowing, but even the slopes above were pretty bare.) I was pretty busy in town getting logistics set up, so I didn’t do any of the hikes to snowier parts of the islands yet.

Then I flew out to the Dry Valleys – so-called because they are not covered in ice sheets. They do get snow in the winter, but much had already melted and evaporated or just sublimated by the time I arrived. I did have to shovel out a site for my tent, but it was only a few inches deep and too crusty to see multiple layers in it. (So I guess they were well bonded?)

But then on November 18, it started snowing in camp! It continued the next day, leaving a white dusting over the rocks in the valley! No real layers there to bond, though. 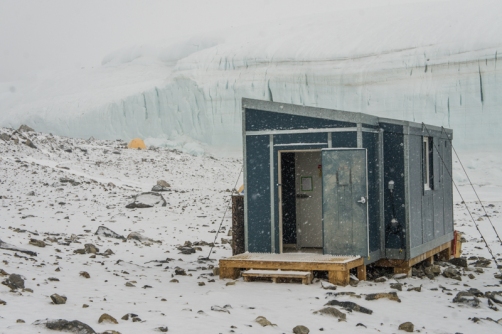 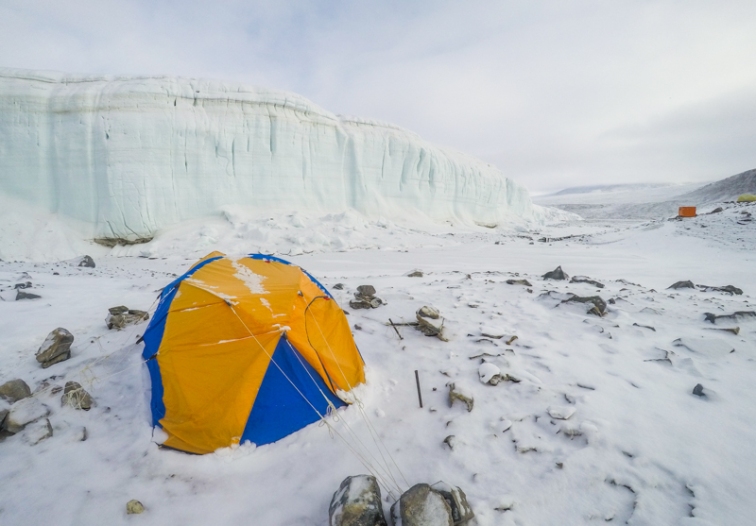 The snow pretty much all sublimated within a couple days, as this is one of the driest places on earth. But as I write this, it’s snowing again! It feels cozy in the cook hut, and magical out by the helicopter pad and tents.

How do the showers work? Can you do laundry?       -My mom, after I mentioned showering

Not at the field camp, we can’t do laundry. Our only source of water is melting chunks of ice from the glacier (glacier berries!), which will get harder to collect once the lake ice starts to melt, so we try to conserve water. Here we are stacking glacier berries in a sled to pull back across the frozen lake to camp: 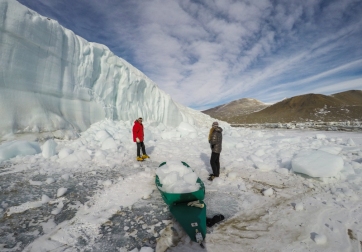 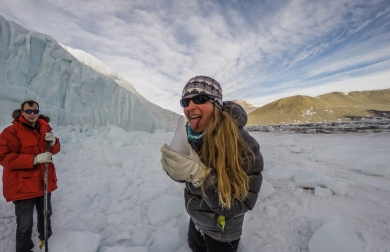 We do get to shower once a week, which is more than I was expecting. I thought I’d go up to four weeks without a single shower or washing my clothes. For showers, we boil water and pour it into a sun shower bag.

A warm sleeping bag, a liner inside that, hot water bottles, and lots of clothing in my case. Some folks here say they are already sleeping with their bags open and stripping down to t-shirts to sleep. Not me! Maybe because my tent is more in the shade of the glacier (worth it for the view in my opinion) and is colder, or because I spent six years doing field work in hot Tucson, I bundle up at night. I am typically wearing 2-3 times as much clothing as everyone else at any given time, though, so it’s probably the Tucson thing. 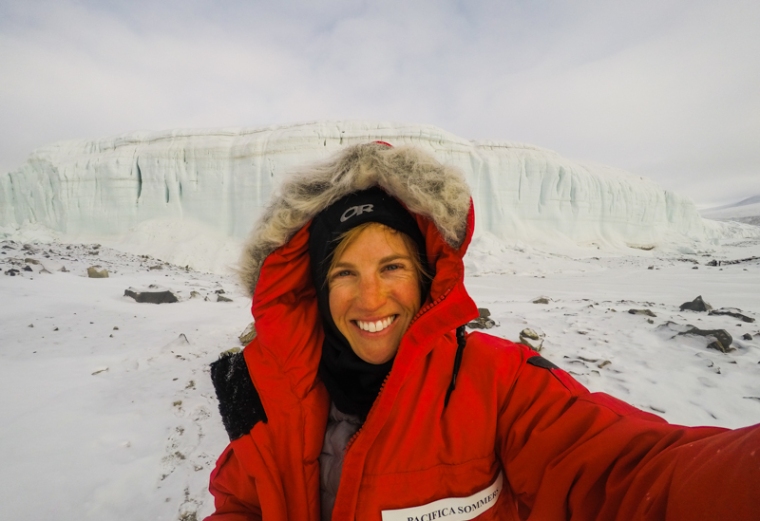 When I first started talking about doing research in Antarctica years ago now, my mom told me I had better watch Werner Herzog’s Encounters at the End of the World. She warned me it looked like this place was full of weird, old bearded men. After watching that documentary and agreeing with her assessment, I still only wanted to do Antarctic research even more.

Not that I have anything against weird old bearded men, but the the US Antarctic Program is somewhat more diverse than that. It is true that there is a majority of men overall, and white men at that. (And a lot of them do indeed have beards.) There are plenty of younger adults working all kinds of jobs, and all ages and genders I have met have been adventurous and outdoorsy, fun kinds of people.

The people are one of the best parts of working down here. There are funny characters. Most people working here are very kind, competent, and fun. One things we noticed at McMurdo was that although there was a bit of bureaucracy about who we had to see about what, the competence and helpfulness of the people in the jobs made it seem easy.

In the field camp at the moment, we actually are majority women. Although we work a lot, both in the field and on data analysis and other computer-based tasks, we are also living out here, and have to unwind occasionally. Some evenings we can go on fun hikes, or take silly pictures, or watch TV shows on the hard drives together.

Want to know more about what I’m doing down here?

Check out our team’s blog: cryoholes.wordpress.com.